THE POLAR PALMS OF BULGARIA

No one knows where they have come from. They still grow at the historical museum's yard in Plovdiv, Bulgaria.

These palms don't look much like the palms currently imported from Italy, Greece or Turkey. Normally palms that grow in a shaded place develop thinner trunks. The four palms in Plovdiv have very fat trunks, no matter that they are significantly shaded. There are so many other plants and trees around, that it is difficult to make a picture of the palms because they are not visible. 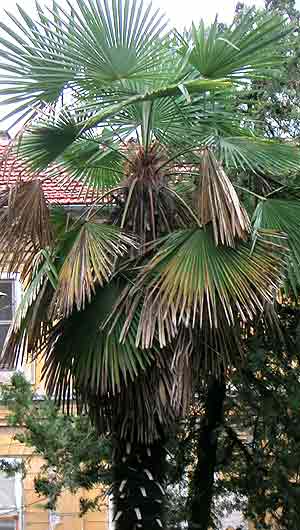 The leaf segments stay stiff also on the older leaves, something uncommon for the imported palms.

On the picture left is one of the palms in the end of a winter. The freeze damages are clearly visible on the older leaves.  Since 1973, when they have been left outside, there were many occasions in Plovdiv when temperatures fell below -20°C (-4°F). These plants survived with no protection even the record cold winter of 1985/1986. In fact I remember seeing them in the TV news in January or February  that winter.

I witnessed a temperature of -27,5°C (-17,5°F) on January 6th 1993 and it was recorded by the meteorology department at the University of Agricutlure in Plovdiv, where I was a student at that time.

After 2000 there were several more winters with lows below -20°С (-4°F). In Plovdiv this usually happens when a temperature inversion is present. During such event there is a thick snow cover, clear sky and no wind. In the valley there is a freezing fog and on the slopes around there is a sunshine. In such situation in the Trace valley and in Plovdiv, which lies in the center of the valley, a record low temperatures are recorded. This is typical for the climate here and happens every winter with no exceptions. The problem is that freezing could last for weeks and the temperatures never rise above 0°С (32°F).

There are not many palm species that are capable of surviving such long lasting freezing period like some of the Trachycarpus species  This is due to their high altitude origin. The genus Trachycarpus comes from Asia, parts of Himalayas, India, China, Korea and Japan.

If the palms in Plovdiv are holding the world record for low temperature survival their offspring on the Bulgarian Black sea coast holds the record for surviving extremely cold events - freeze as low as -18°С (0°F) in combination with strong wind. These palms are what I call Trachycarpus 'Bulgaria'.

Please click on the link up left to read more about them.

The content of these pages is under protection of the copyright laws!
© 1999-2010 Kiril Donov - All rights reserved